Are you tired of reading about my cooking fiascoes yet? Because boy do I have another one for you today.

I've been meaning to try my hand at making crackers ever since I read Cindy W's post about it. I found a recipe that sounded very tasty, yet doable and anyway I had all this butter I needed to use up on something. Why not this?

I snuck out of work at 8:15pm last night, and headed to Honda's to pick up her silicone baking mats and rolling pin that she was letting me borrow. (By the way, if you plan to become a non-consumerist, I highly recommend befriending someone who got married less than a year ago so you can borrow all their new fancy schmancy kitchen gear.)

The recipe called for a cup of whole wheat flour. Now, I don't actually use flour a lot because I don't actually bake ALL that often. (I find that baking goodies means eating more of said goodies. So I try to keep it to a minimum.) So I was kind of meh about buying a whole sack of King Arthur when I needed such a small amount. And then I had a brain wave. (Yes, it occasionally happens. Don't look so shocked.)

Why not stop by that bulk food store I discovered last week? Since everything is in bulk bins, I was free to buy as much or as little as I wanted. And by the by, THIS to me is the true beauty of the bulk food store. Because, frankly, buying in bulk is not for me. I live alone in a small one bedroom apartment with a pretty tiny kitchen and no storage space. I would much rather buy my flour by the cup than the ton.

Anyway, fortunately I had a plethora of Tupperware and yogurt containers in my car. (Don't ask.) I stuck them in my grocery bag and walked over from Honda's apartment to the store. Sigh. Can I tell you how much I am in love with this store? They have everything you can imagine in bulk bins. Spices, sugar, oats, flour, honey, oil, dishwasher soap. Everything that is except for whole wheat flour. Oh there were bins for them. Two actually, one for whole wheat flour and one for whole wheat pastry flour. But both were empty. Sad! I briefly considered buying whole oat flour instead, but as much as I am learning to substitute ingredients, flour seemed like a big thing to be messing with in a cracker recipe.

But I just couldn't leave without buying anything, so I decided to buy some kidney beans and whole wheat basmati rice to make some rajma next week. I put my container under the spout, pulled the handle down, aaaaand kidney beans started raining down all over, in my container, on my clothes, and all over the floor. I tried to push the handle up quickly, but it was too late. I had officially made a huge embarrassment of myself.

Luckily, the store employee was super sweet, and tried to console me saying stuff like, "Those bins are hard to close!" and "Believe me, I've seen way worse." But, man did I feel stupid. I manage to get my rice without mishap, had my containers weighed, paid and slunk out of the store. 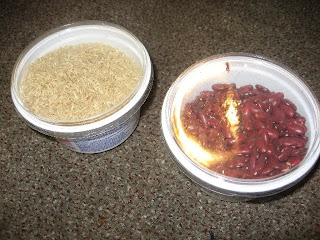 The Albertsons across the street used to be totally ghetto, but Honda said it had yuppified recently and boy was she right. I picked up the polenta, some cheese, and my whole wheat flour and then headed to the dairy aisle to get buttermilk. But the buttermilk came in a quart container, and it seemed patently ridiculous to buy a quart of buttermilk when I only needed 3/4 a cup. I stared at the buttermilk, wondering if I was going to have to spend the whole month looking for new recipes involving buttermilk just to use up a quart.

And then I had another idea! I remembered Melinda talking about making buttermilk biscuits and how when you turn cream into butter, buttermilk is a byproduct. And that Crunchy had swore that making butter was very easy and basically just involved shaking cream in a mason jar for 15 minutes. Why not just make my own butter/buttermilk?

Rational Arduous piped up. "Um, it's almost 9:30pm. You're already trying to make CRACKERS which you've never done before. And now you're going to try to make your own butter? Dumb."

To which Irrational Arduous responded, "Well Crunchy SAID it was easy. And I don't want a whole quart of buttermilk."

"Yeah, and you know what else you don't need more of? Butter! That's WHY YOU'RE MAKING CRACKERS YOU FOOL. TO GET RID OF YOUR BUTTER!"

"Yes but butter is more useful than buttermilk. Besides, making my own butter makes for a better blog."

Rational Arduous had no response.

It's easy to make butter in that it doesn't require too much mental energy, but it does take some muscle work!

Oh boy! I can't wait for the rest!

1. Can't wait to hear how you made butter - did you use a mixer (cuz I haven't done it the Crunchy way yet - I remember vaguely doing it as a kid and being exhausted before it was done).

and 2. Last night I had an adventure in crackers, too!!!! I tried, and I failed. And I also went out on this strange adventure at about 10pm. The Melinda 2 years ago would not have believed that she would be trying out such a domestic thing as baking crackers at 10pm on a Thursday night.... my how far I've come???

And... I failed. They were miserable crackers. Hope yours were better!

Girls, girls, girls...I don't do crackers. They are a pain in the butt to make and impossible to make fat-free. The easy solution? Tortillas, toasted until they are crisp like crackers. Corn tortillas are very easy to make and flour ones are not that much harder.

Can't wait to see how they turn out... too bad they didn't have the bulk flour!

I love bulk food for the same reason... I can get EXACT:Y enough of whatever wierd food I'm cooking for the recipe!

I'm confused...do you need just buttermilk or both buttermilk and butter? You can often substitute buttermilk with milk mixed with some lemon juice. Don't remember the exact proportions, but it should be easy to find online.

Either way, I can't wait to hear about the crackers! :-)

Ahh, cooking on the fly is an adventure! Hope your crackers turned out and that you didn't stay up until 3am to make them. :)

I've never heard of rajma. I should try to make it.

Butter making is a bit too advanced for me (I'm lazy). And I'm thinking about making crackers some day.

A clerk gave me trouble this weekend because I didn't want to use a plastic bag to put my purchases. What is up with these people?

I did make a batch of cheese poppy seed crackers (heart shaped too). They were really yummy, but only for a couple of days. For some reason the fresh cheddar cheese in the crackers turn a bit smelly, like oil being stored for too long, after a couple of days. Beside stuffing myself and my kids, I gave to neighbors as well (so far I have not heard complaint about food poisoning :)). It makes me wonder why the boxed cheese crackers do not taste/smell funny after a few days or weeks. Perhaps the difference is that they use cheese powder rather than fresh cheese. Anything powder form lasts a lot longer. Or are there preservatives in the boxes?

Where did you find a bulk goods store in LA? I Googled but couldn't find any.