Guys, guys! Guess what? Today I went out and got four pairs of pants, a skirt, a pair of pajamas, two dresses, five tops, a belt, and three pairs of shoes!!

Yes, I'm serious. But no, I did not fall off the wagon.

See, back during FeGROCMo, I decided to organize a clothing swap to get rid of some of the clutter in my closet. Unfortunately, life intervened and the clothing swap had to be postponed.

In the meantime I realized the clothing swap was slightly more controversial than I had expected. There were some concerns expressed about all of us girls being different shapes and sizes, and people were concerned that while some people might have lots of clothes to swap, others would be left out. And then there were the myriad of scheduling conflicts with any and all dates.

So the swap almost fell apart. But then Honda wanted to go to the mall, and our friend Pi suggested we come over to her place, she'd make us delicious breakfast, the three of us could swap clothes, and then go shopping.

And that's what we did.

When I started looking through my closet for the swap, I realized I could not just bring the ugly stained stuff. In fact, it was probably best that the ugly stained stuff get left behind. So I decided to cull through my huge collection of dresses and take all the stuff that didn't fit me properly or that I never wore. Then I did the same for tops. And bottoms.

A lot of stuff got put in the pile that I REALLY didn't want to get rid of. Not because I ever wore the items in question, but because I was nostalgic for the items in question. I wavered and wavered over the red dress with the floral print from Express that I bought in the summer of 2001. I had loved it so much! I had worn it incessantly for several summers. It was a good dress.

But it no longer fits right. I've lost that freshman 15, and it's just not flattering anymore. Still, I was hesitant to part with it.
"Well," I told myself, "If no one wants it, I'll take it back."

Because, for me, it's easier to give up my babies, by which I mean my clothes, to my friends. Not because I intend to call them and be like, "Hey, you know that dress I gave you? Can I have it back?" but just because I know that my clothes will have a good home where they will be loved and live to frolic and play another day. So I was able to put together a pretty decent collection of stuff for the clothing swap. 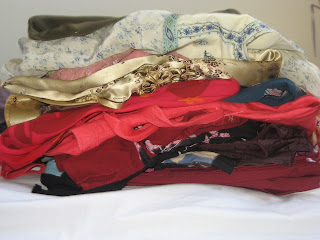 I went to the swap not really expecting it to be THAT successful. Pi, Honda, and I are three very different body types and we all have different tastes. But it turned out we all managed to find several pieces of clothing that we liked and that fit! I wasn't really planning on taking too much. After all, I was trying to reduce clutter in my closet, not add to it. But Pi and Honda who are familiar with both me and the increasingly hobo-tastic state of many of my clothing staples were like, "You're taking those shirts. They look great on you." And you know, they did. So I took them. 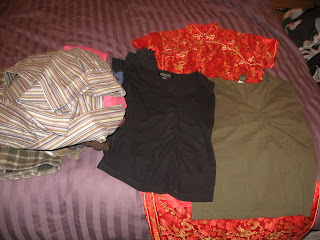 And when no one wanted the Express red dress, I was totally chill about throwing it into our communal Goodwill pile. I guess I just needed a little push.

After that, we headed to the mall, which normally I avoid because me going to a mall is a little like an alcoholic going to a bar. Today though, I felt pretty okay with the not buying given that I had just gotten a wardrobe makeover for free.

Then I came home and as I put away my new clothes, I managed to further weed out some stuff I just didn't need anymore now that I had my shiny new couture. So, even though I ended up getting more at the swap than I expected, I think I did end up with a net decrease in closet clutter.

All in all, a very successful day.
Posted by ruchi at 8:34 PM

Awesome! I wish I had girlfriends in the state to do this with. Sounds like a lot of fun!

I purge my wardrobe every once in a while... since I've been buying everything used, it's not too painful to send it back from whence it came.

That's awesome! I always fantasized about sharing/swapping clothes with friends, but no one is my size and my clothes are always crappier than everyone else's --> not a fair swap.

Very cool. Nothing is better than getting new to you stuff for zero dollars or carbon emissions. Life Less Plastic posted about a huge clothing swap she went to. It's called a clothes swap-o-rama-rama.

It looks awesome. There is one in my vicinty in a few months. I think I'll check it out.

What a great idea! I did this back when I had 6 female flatmates, but never since. Maybe I should get something together.

BRAVO! I was cleaning out my girls' closet yesterday and found two garbage bags of clothes that they can no longer wear. The non-stained ones will go to my friends' kids. The stained ones, hmmm, can someone help with stain removing?

I love getting clothes from others for me and my kids. I am totally inspired! Perhaps I can organize a neighborhood clothe swap.

I love this idea. Everyone in my little social community is really great about doing this with kids clothes, but not for ourselves. Besides maternity clothes, we don't swap. Size is a big issue. Some don't want anyone to know their size. Most woman are just not comfortable with the ...hey this is WAY too big on me...can you squeeze into it? Also, in all honesty, many in my circle are too picky and fashion conscious. Some would even be insulted at the idea. We all just end up donating our old stuff to charity and buying new. I will have to think on this one. Maybe look into the community swap kind of thing.