Adventures in Crackers 2: The Mighty Sucks

When we last left our heroine (that would be me) she was driving home at 9:30 at night intending to make butter and crackers that evening. She also had yet to have her dinner so she was a little tired and cranky and probably not within her right mind. Otherwise she would never have come up with such a bad plan. Or would she...

By the time I got home it was a quarter to ten. I was starving, and not a little tired. I briefly thought about postponing my cracker-making, but I was really excited now to try it out. So I fried some of the polenta for dinner (with olive oil, mmm) and put the cream on the counter so it could warm up slightly.

Finally, at about 10:10, I was ready to start making the butter.

Now, if you look at Crunchy's instructions, you will see these helpful and so pretty pictures of what happens after four minutes and five minutes, etc. You will also see that Crunchy managed to make her mason jar butter in fifteen minutes.

Yeah. Turns out, La Crunch has much stronger arm muscles than I do. Because it took me about 15 minutes of shaking my jar like a mad woman before my butter began to look like Crunchy's did at 4 minutes. 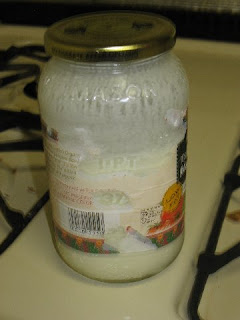 At twenty minutes I started wondering if I was doing "it" wrong. By "it" I mean, the shaking, the jar, my life, etc.

After twenty five minutes I wondered if my arms were going to fall off. 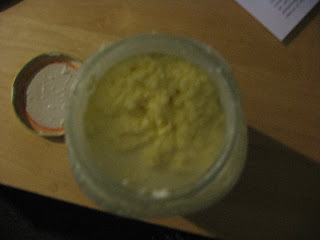 FINALLY, a whole 45 minutes after I started, I had butter.

Joe my God, I MADE my own butter! Suddenly, it was all worth it. 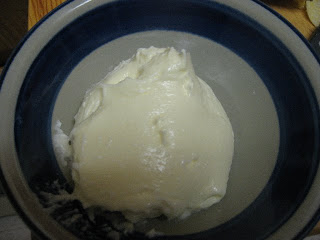 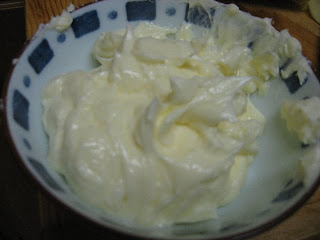 Of course, now it was almost 11:00pm, and I hadn't even started on the crackers yet. But I had experienced the thrill of butter success, so I was determined to get working on the crackers. "How long could it take, really?" I thought.

At first everything was smooth going, and I was optimistic that I might have the crackers done at a 'reasonable' hour. I blended, I spiced, blended some more, and then just as I was adding the last ingredient, that damn butter milk that started all of this melodrama, my notoriously cranky blender overheated and died.

So then, I tried to mix the buttermilk in using the hand mixer, but ... that wasn't so much working out. 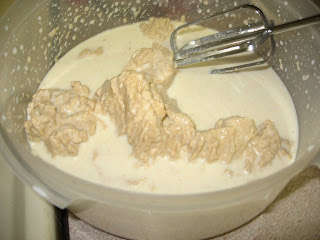 So then, I decided to just knead the buttermilk in by hand, and I ended up with sticky gloop all over my hands.

By now, it was past 1:00 am. I was tired, I was defeated. I threw the gloopy doughy mess in the fridge, left the kitchen in its disastrous state, and went to bed.

The next day (Friday) I was supposed to spend at a bar with some friends. But a bunch of people bailed, and plans were postponed. So I was free to spend my Friday night dealing with the cracker debacle. Lucky me!

I staggered out of work at about 8:45 pm, and headed home. Let me tell you, the last thing I wanted to do at that point was deal with this cracker dough. But I figured if I didn't try and bake it tonight, it was never going to be made as my mom and sister were going to be in town over the weekend.

The dough was as gloopy as I remembered it.

I tried to roll it out (I figured even though the milk hadn't been blended in properly, it probably didn't need more milk.)

The gloop stuck to the pin. It would not roll.

Finally, I decided I must need more flour. After all, this dough did not look like dough.

I added more flour. And polenta.

And then like a crazy person added more flour. 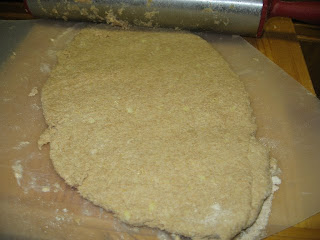 I rolled it out and cut the crackers from a glass. I didn't care that the crackers were thicker than any cracker I had ever seen before. I had long given up on anyone other than me eating these crackers and I just wanted to have them done. Who cares how they looked.

They turned out so bad, that I took a small bite (and by a bite, I mean, literally, I ate a crumb) and spit it out.

So I decided I had to at least TRY and make these crackers vaguely edible. So I rolled them out very thin, and cut them all pretty. And baked 'em. 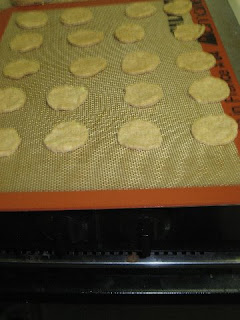 And they still tasted as nasty as all get out.

What I realized, finally, was that I actually have no concept of what cracker dough looks like. And cookie dough is obviously more floury because they are supposed to be moist and chewy. Unlike crackers which are supposed to be ... crispy. So my adding more flour was dumb. Though I don't know how I was supposed to roll out the dough when it was so wet and sticky.

So I had to throw all the dough and "crackers" out in the trash. And I had been doing so well with the No Waste Challenge as of late. Oh well, I guess it was educational.

Meanwhile, I am now desperately craving crackers. So I'm off to Trader Joe's to get the good stuff.
Posted by ruchi at 10:24 AM

omigod! You made butter!

Yes! It was very exciting. Let's focus on that and skate over the part where I ruined crackers. :)

Oh, poor Arduous. That sounds so suckful. I hope the butter is delicious. To me, crackers are one of those things that cannot be cooked at home, like cinnamon rolls, croissants, and saag paneer. But I'm lazy.

At least you made the butter! That's still a victory. :)

Sorry about your crackers. But that's some nice-looking butter! I wonder if those machines that shake paint cans can be adapted for making butter? :-)

it's so great that you try out these things. i wouldn't have the patience

You made butter!!! That in itself is a triumph. IMHO, crackers are quite difficult to make. Data point 1: there are so many more cookie recipes out there than cracker recipes. Data point 2: When I asked a semi-professional chef friend for cracker recipes, she said that crackers were very hard to perfect. There, you should've tried soufflé instead, much easier :))

Butter! Yes, I may have been shaking the sh*t out of it. Maybe if you had stopped to take pictures every three minutes it would have gone faster :)

Oh, no, I'm so sorry the crackers were such a fiasco!

But was the butter worth it? It looked good!

Yes, homemade butter is definitely worth it. And not that hard. And maybe a fun project with the kids, though I think Bean-girl is still probably a little too young. Maybe in a couple years.