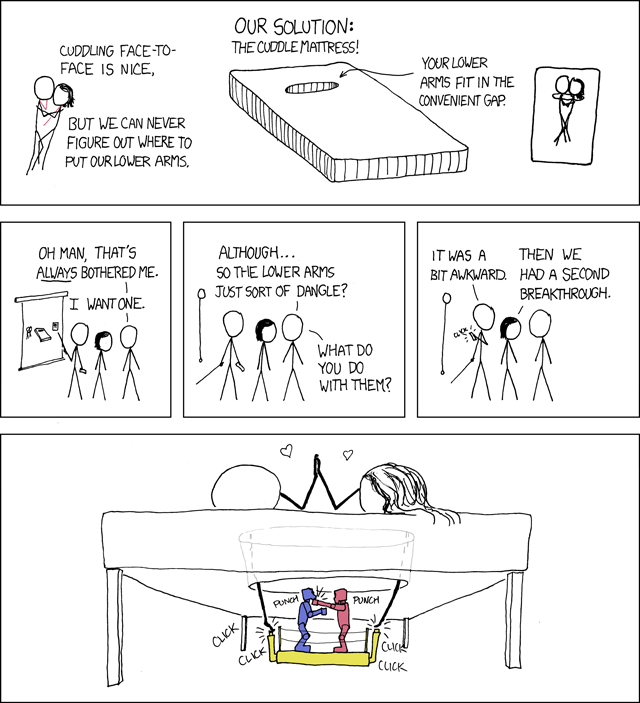 You know, I totally meant to spend some time on this blog writing about my search for a new eco-mattress, a search that I undertook in ... September. But then I got engaged in October, and then the holidays came up not long thereafter, and then I went to India, and pretty soon, it's January and I haven't started that set of posts.
But in a way it's a good thing because we've had ample time to break in our mattress so I can give a really full review on that. First things first, though, so I'm going to tell you a little bit more about our search. I'm not going to go into the specifics in terms of comfort (because that's so personal) but mostly focus on the eco-aspects of the different mattresses.
We are lucky living in the Bay Area, so we had a LOT of options for eco-mattress stores. No need to wander Mattress Discounters in search of their ONE eco-mattress. If you don't live in the Bay Area, finding a mattress might be slightly harder, but luckily, almost all of the places we looked at deliver, and they usually have a fairly decent return policy.
So.
One of the first places we ended up looking was Keetsa. Keetsa came at the recommendation of a friend and their store is located not too far away in San Francisco itself. Though they have one full latex mattress, they are mostly known for their wide range of memory foam mattresses. (You may know memory foam by the brand name Tempur-pedic. Tempur-pedic mattresses are probably the most well known memory foam mattresses, but they aren't the only kind out there.)
Here is the good about Keetsa: their mattresses are reasonably affordable as far as eco-mattresses go. And while most memory foam mattresses often off-gas toxic levels of Volatile Organic Compounds (VOCs), Keetsa ran a test that shows that their mattresses do not emit VOCs, and they put that test up on their website.
Most memory foam mattresses are made with 100% petroleum, but Keetsa substitute 20% of the petroleum in their mattresses with castor bean oil. And -this is kind of fun- they stick their mattresses in a box so that you can fit your mattress in the back of your car saving time, energy, money, etc.
BUT, their memory foam mattresses are still 80% petroleum. And while they say they don't emit VOCs (and put up a test to prove it) I wasn't entirely convinced. Ideally, I'd like to see a third party independently conduct a test and see what they say.
The other thing that was slightly hilarious was how all the other green mattress stores really, really dislike Keetsa. When we went to one store, the proprietor told us that he had a mattress that came in a box and I immediately exclaimed, "Oh! Like Keetsa!" and he went really quiet and it was really clear that he did NOT LIKE the comparison at all because his eco-mattress was NOTHING like Keetsa even if it did come in a box. In another instance, a saleswoman basically cautioned us against green-washing and then said, "I mean they're affordable, but they only substitute 20% of the petroleum in their mattresses."
Which is fair enough. Keetsa is not a perfect option, but we shouldn't let the perfect be the enemy of the good. They produce reasonably affordable mattresses, I do believe they strive to be as Earth-friendly as possible, and their mattresses appear not to emit VOCs. And according to Yelp, a lot of people find their mattresses really comfortable. Plus, you do always have the option of buying their natural latex mattress which is 100% latex and thus has no petroleum nor VOCs.
Ultimately, though, we decided to keep looking. More mattresses coming up later this week....
Posted by ruchi at 12:01 AM

1. Up to 40-60% soy and sunflower oil in the Spaldin Tubes
2. Independently tested and certified by Oeko-tex 100 to contain no VOCs or other harmful chemicals. They provide their Oeko-tex certificate numbers on the web site and a link to Oeko-tex to verify (Oeko-tex certificates are only valid for one year)
3. They come in that same compressed box
4. Their foams are actually made by Vita-Metzeler of Germany, who was the first company to incorporate plant oils into their foam formulations (and won an award for it in 2002).
5. Their "tubes" design - which helps alleviate the heating issues associated with foam and memory foam mattresses - is an example of "biomimicry": inspired by a bee hive!
6. They offer occasional 10% discounts to their FaceBook and Twitter followers - saved over $150!

My wife and I have been sleeping on a Spaldin Tubes for over 2 months now and LOVE it! A friend of mine worked for them at Green Festival in SF this last November, so we got a chance to try it there.

Two more bits of info that I learned during my mattress research:

1. Remember with latex that rubber plantations are a significant driver of tropical deforestation and most have at least some synthetic fillers (some up to 70% fillers). Lots of greenwashing there too. Some links to explore:
- Recent Science article on "The Rubber Juggernaut": http://www.sciencemag.org/content/324/5930/1024.summary?searchid=1&HITS=10&hits=10&resourcetype=HWCIT&maxtoshow=&RESULTFORMAT=&FIRSTINDEX=0&fulltext=the%20rubber%20juggernaut
- Mongabay summary of the above Science Article: http://www.sciencemag.org/content/324/5930/1024.summary?searchid=1&HITS=10&hits=10&resourcetype=HWCIT&maxtoshow=&RESULTFORMAT=&FIRSTINDEX=0&fulltext=the%20rubber%20juggernaut
- Journalistic Summary of two reports on the need for eco-certification of latex: http://www.dailynews.lk/2010/09/06/bus33.asp

The mattress biz is rampant with greenwashing - we need someone like FSC to certify latex plantations.

2. With wool (as with cattle products), most people don't realize that you can have organic, cruelty free, grass fed, free range wool that still comes from highly overgrazed grasslands with decimated biodiversity and aquatic habitats. Unfortunately, there is no FSC-type certification for grasslands as of yet. Badly needed!

Good luck - looking forward to seeing what you end up with. :-)

Oh, and Spaldin is the first mattress line to have ALL components (foam, cover, fire barrier) each independently tested and certified by Oeko-tex 100 as Class I: safe for babies.

We couldn't find any other mattress that had that level of independent health certification. Nor could we find any that posts their certificate numbers to verify - loved the transparency!

This is where I got my mattress:

They were the only company I could find that certifies every single aspect of the materials in their products. I have spoken with the woman the owner and she does an amazing job and making sure that all of her products meet organic, natural standards. I do not receive anything from posting this, I just wanted to let you know about the company. It is local to me, however, I do not know if they have a location in your area. I highly recommend their mattresses.

"Ecobaby, Inc & Pure-Rest Organics Offers over 17 Years of Purity and Quality Manufacturing in everything organic textiles for the home and family, including babies. We take care of your natural needs from birth and through out life.

Our line of Organic Mattresses, Bedding, Pillows, Pads, Comforters, Blankets, Baby & Children Clothing, Diapers, and Toys... are ALL tested yearly at a third party lab. No gimmicks, no hidden fibers, no hidden additives, no certificates that have no meaning in order to make ourselves look good. Just straightforward organics from a company whose president is chemically sensitive and recognizes the need for purity from the start and through the consumer's door.

glad I am not the only one who reads xkcd ;) I been looking for a new mattress too and have gotten stuck on "Shephard's Dream" because its supposed to be the last mattress you'll ever buy. As soon as I can afford a new mattress; I'll be looking into this one further; see if I can find anyone who has bought one etc.

lol i love the cartoon. Did you draw it? Until I found your website, I'd never really put much thought into a mattress. All I do know is that the one that I use right now is kind of uncomfortable. I'm gonna checkout some of the advice in these comments here in looking for a new one. By the way, thank you for making the fun post.

Indeed, that cartoon was so cool and funny. I really love how it is done. I had a great time in this blog post. Keep posting article like this.

Hey! Thnx for this i was eagerly finding dis ,Long Back ! Thnx a Tonn Latex Mattresses

Your animation about the cuddle mattress is really fun! A lot of people will certainly love reading your informative post.

Love the comic! The information about Spaldin are also really interesting, I will check them out for my next mattress.

Im inspired with the exceptional and instructive contents that you provide in such short timing.memory foam mattress

The importance of good sleep in one's life is understood. A perfect sleep can fill the new energy in the body to resume the daily work and for having the delightful sleeping experience, a good pair of mattresses is must. A perfect mattress that supports your back can actually vanish so many physical and mental health problems. The blog shares informative content about the mattresses. To buy a perfect pair of mattresses for yourself at reasonable rate, visit best mattresses price Houston.

You have done a great job. I will definitely dig it and personally recommend to my friends. I am confident they will be benefited from this site. memory foam mattress

The internet is bogged down with bogus blogs with no real message but the post was fantastic and well worth the read.Thank you for sharing this with me. adjustable mattress reviews

Love your comic strip, you reiterated the ideal mattress.

Your blog is amusing and the graphics illustrates well the mattress. I am just wonder what those two figure like dolls doing underneath the mattress.

Thanks for a very interesting blog. What else may I get that kind of info written in such a perfect approach? I’ve a undertaking that I am simply now operating on, and I have been at the look out for such info.
costco memory foam mattress

I came onto your blog while focusing just slightly submits. Nice strategy for next, I will be bookmarking at once seize your complete rises
is memory foam toxic

Once I thought about things like: why such information is for free here? Because when you write a book then at least on selling a book you get a percentage. Thank you and good luck on informing people more about it!
memory foam vs spring mattress