Be A Bookworm: The End Of Poverty

There are the great books that change your life, and radically shift your way of thinking. Then there are the great books that aren't life changers, but arm you with plenty of new information. And then there are the great books which are life affirming, which give you hope in humanity, which encourage you to keep striving for a better world. The End of Poverty by Jeffrey Sachs is definitely that third kind of great book.
The premise for the book is simple: to provide a blue-print for how we can eradicate extreme poverty by the year 2025. And what is amazing is that Sachs is indeed able to provide such a blue-print.
Will it be easy? No. But Sachs makes a strong case it won't be nearly as hard as most people think.
Sachs writes eloquently and persuasively about how developing world economies can stabilize and grow, and provides several case studies including Bolivia, Poland, India, China, and Kenya. He offers tremendous insight as to why African economies have failed to grow, and fingers geography, ecology, and diseases such as malaria and AIDS as some of the key culprits. Yet, geography is not destiny, and Sachs argues that investments in transportation infrastructures, in sustainable agriculture, health, and education could turn around failing African economies. Moreover, he argues that such investments can be easily financed if the developed world donates a mere .7% of it's GDP to the developing world. That's right, for less than a percent of our GDP, we can pull the entire world out of extreme poverty.
But for me, the most compelling part of the book was Sachs's discussion of the poor living near the railway tracks in Bombay. As Sachs talks about the danger these people face, and the need to empower the people, my mind kept drifting back to those poor children playing cricket near the tracks. 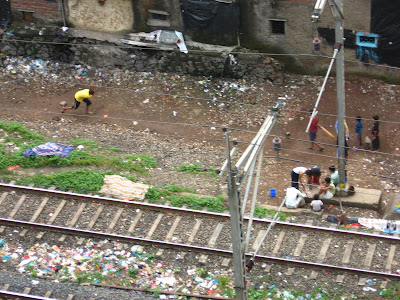 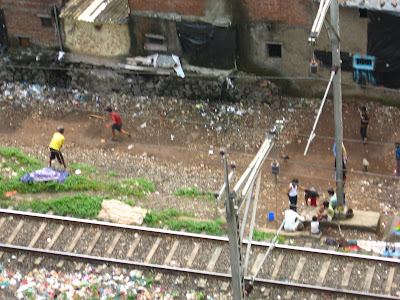 These children are not an abstraction for me, but are viscerally imprinted on my mind. When Sachs writes that we can't afford NOT to help the developing world, I can't help nodding my head.
Now for the warning. The End of Poverty is definitely not Light Economy. There are several discussions of Donna's favorite guy, Adam Smith. I actually *liked* the discussions of economics, but, well, I'm weird.
Still, even for those of you who are a little econ-phobic, I'd urge you to push past the economics discussions and read this book. This book is incredibly important, now, in our time of financial panic, more than ever. There will be temptation by many to close the purse-strings, to offer less instead of more to the developing world. It is critical that we do not do so. The budget tightening that many of us are facing is miniscule compared to the downward spiral of poverty currently occurring in Africa. And it is important for us environmentalists to remember that it is the developing world, and especially Africa, that will be hardest hit by climate change, and indeed, is already being hit by climate change.
Star rating: five out of five stars.
Recommended for everyone who can stand some economics talk. Hey, Bono wrote the foreword! So if you hate econ, at least you're rewarded with some Bono?
Posted by ruchi at 12:01 AM

This one sounds good to me. I'll have to pick it up.

I know alot of people didn't like CommonWealth, also by Sachs, so much. And it was dry. But I felt that one was incredibly important and full of solutions that are totally doable.

I'll have to pick up End of Poverty. Sounds like Sachs has done it again.

Finally, I couldn't agree with you more about slamming our wallets shut in a time of financial uncertainty. Certainly some of us who are struggling to hang on to our homes will not be donating as much. Though one such person has said that she donates time instead of money. So we can still give. And for those of us who can afford it, who are still employed and paying bills, we can still give. What is happening here is terrible. What is happening in the developing world is a nightmare.

Hi, I'll have to see if I can scrounge a 2nd-hand copy. Thanks for sharing.
Sounds worth reading. Poverty is high on my agenda, especially children in poverty.
And as for those Indian children, I saw them - it's heartbreaking and bloody frustrating.

Joyce, I'll definitely be interested to hear what you think!

GB, I STILL haven't read CommonWealth! I know, I know!! But it's on my list. End of Poverty was for a class, so it came first....

Mon, I'm pretty sure you could find it in a library as well. The book has been out for a while so it should be readily available.

Would you consider posting your list of "third kind of great books"? My local library is small, but I can get books thru interlibrary loans, as long as I know what to ask for.
Thanks!

Ej, off the top of my head I think Three Cups of Tea and End of Poverty definitely qualify in the third category. I'll try and think if anything else I've read qualifies.

Glad you've got the commenting thing sorted out. Sorry if blogger swallowed up any of your comments!!

Can we cut and paste this one to the Bookworm?

I actually liked Common Wealth. I felt it helped change my opinion, or at least clarify it to me.

I've been meaning to pick this one up too! Shannon

Shan, sure I don't mind. You can copy my review to the Bookworm.

Great! As you have one post up there this week, why don't we save it for next week for a double-week-whammy of bookalicious Arduous. Shannon