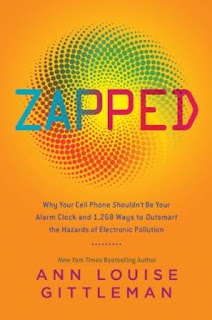 It seems lately like people are increasingly worried about cell phones, wireless routers, and other kinds of electronic pollution. In the week I agreed to review Zapped, I coincidentally heard an NPR piece on cell phones and cancer, had a co-worker mention her fears on the same, and witnessed a friend turn off her wireless router to protect against electronic pollution.
It seems Ann Louise Gittleman's latest book, Zapped, which discusses the problems of electronic pollution, is nothing if not timely. In the book Gittleman outlines the various problems with electronics (and according to Gittleman, it's not just the cell phones and the routers that are problematic, but ceiling fans, hair dryers, and microwaves to name a few.) She then offers some solutions for how to reduce one's exposure to dangerous electronic pollution, while not going Amish.
Gittleman's book is essentially based on the precautionary principle: if we don't entirely know what the danger is, we should act with caution. Although Gittleman cites numerous different studies in her book, the reality is that the science is still out. We don't really know what the effects are of electromagnetic exposure. We don't know what the relation is between cell phone use and brain cancer. We just. don't. know. And studies on these issues are difficult to design for a variety of reasons, which is also why any studies on the subject need to be viewed with a fairly critical eye.
In some senses, then, it seems rational to follow Gittleman's cautionary stance. Why take a chance? If we don't know whether electronics can harm you, shouldn't we air on the side of caution?
Well, maybe. The precautionary principle isn't a bad one, necessarily. But on the other hand, we, as a society, all need to appropriately assess risk. And as a recent article in the New York Times by Lisa Belkin indicates, we are often pretty crummy at doing just that. Belkin writes:

And while we certainly make constant (mis)calculations in our adult lives, we seem all the more determined yet befuddled when it comes to the safety of our children. For instance, the five things most likely to cause injury to children up to age 18, according to the Centers for Disease Control and Prevention, are: car accidents, homicide (usually at the hands of someone they know), child abuse, suicide or drowning. And what are the five things that parents are most worried about (according to surveys by the Mayo Clinic)? Kidnapping, school snipers, terrorists, dangerous strangers and drugs.

Right. Notice how those lists do not coincide at all?
Here's the point. If you are seriously worried about electronic pollution and want a few pointers for how to reduce your exposure, sure read Zapped. Get a head set for your cell phone. Turn off appliances when you are not using them (that's good for the environment and for your electricity bill anyway.)
But before you spend thousands of dollars and hours and hours of time with an electrician trying to protect yourself, I would ask yourself to think critically about the risk here. Before you campaign to get rid of the wireless internet at your child's school, I would contemplate the relative risk of wireless internet versus the risk your child assumes every time she gets in the car on the way to school.
We cannot live in a bubble, nor would we want to. Every action we take involves some level of risk. And at the end of the day, to be a functioning member of society is to, on some level, accept a level of risk.
So, you know, if you want to read more about electronic pollution, there are definitely some interesting things about Zapped. I was particularly interested in the chapter in which Gittleman touches on the dangers associated with too many medical tests. And I appreciated some of her nutritional advice (Gittleman is actually a trained nutritionist.) I believe only good can come from eating better and exercising.
But, if you do read Zapped, I would advise you to read it wearing an analytical, questioning hat. Don't succumb to paranoia. And remember to think critically about risk.
Posted by ruchi at 12:01 AM

It sounds like there is some great info in this book and that it could be very helpful ... provided that the reader doesn't go overboard and do become paranoid. :)

Thanks for being a part of this book tour.

Earn easily 200 dollars here in the internet. Simply be an affiliated member and promote the site and its product! http://www.earn-200-dollars-online.info/