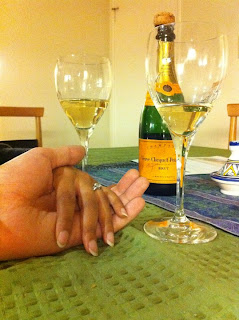 Yup. I am now an engaged woman. The whole engagement thing was totally perfect. My boyfriend, now fiance (except I hate that word ... can I call him my pre-husband?) surprised me totally and completely, which is hard to do, especially when we had been out ring shopping the week before. Suffice it to say, we are both pretty darn happy.
I've always had mixed feelings about the whole engagement thing. Back when I was single and the whole engagement thing was completely theoretical, I wrote this post about the ring dilemma. The post was one of my most popular posts ever, and the comments are still some of my favorite on this blog. Everyone seemed to do something different, and yet everything that people did, traditional or no, was so lovely and special.
Still, when it came time for me to get engaged, I had misgivings. After all, I spent a year as a non-consumer and an engagement ring seemed, in many ways, to be a wasteful extravagance. I love rings. I love jewelry. I adore other people's engagement rings. And yes, I'm going to be honest, I secretly DID want one myself. However, I also do like to live by my principles and sometimes that means saying no to yourself especially in our consumer-driven culture.
My pre-husband, on the other hand, felt pretty strongly about it. And what he felt was that he wanted to get me a ring. After some half-hearted negotiation (Are you sure you don't want to get me an engagement mattress? What about an engagement trip to Detroit for Thanksgiving?) I agreed to the ring. And so I set about finding a ring that I would love and that would also fit in with my principles.
There are an increasing number of options available in the "green engagement ring" category and it took a while for me to sort through my options and figure out what was right for me.
Conflict free diamonds (such as the Canadian diamonds offered at Brilliant Earth) are a nice option for those wanting to avoid blood diamonds (and come on, who really wants a blood diamond, no matter how beautiful it is?) But, even conflict-free diamonds do have to be mined, and any mining process is going to have some environmental impact.
I flirted with synthetic diamonds for a while too. But once again, synthetic diamonds have some impact, even if it's less than that of a mined diamond.
In the end, the choice I made for myself made the most sense given my history. I chose a used diamond ring ... or in fancy terms "vintage." The ring is estimated to be from the 1940s, and although I don't really know the history, I can make it up. Maybe my ring belonged to the bride of a World War II vet. Maybe they wrote impossibly beautiful letters to each other during the war. Maybe their letters were totally boring: "Dear Barbara: France is hot. Love Ralph." Maybe Barbara worked in the war factories. Maybe Ralph almost died. Maybe they had a long and beautiful fifty plus years of marriage. I don't really know, but I like the idea that my ring has a story to tell if only I could hear it speak. Point being, I love my ring. Also, it's super shiny! I'm getting a little distracted right now looking at it.
The past couple weeks have been total engagement bliss. We've been lucky enough to get to celebrate with many of our friends and family members over the past few weeks, and it's served as a reminder that we're not just marrying each other, we are marrying each other's communities. And I have to say, I think we both lucked out in that we are both marrying amazing communities of people. I feel completely confident that I am READY for marriage.
A wedding, on the other hand, is a total different ball game. But that's the subject of another post.
Posted by ruchi at 4:10 PM

Congratulations!!! I love the stories you are making for your ring. I'm so happy for you!

Yaaay! I have no idea why we even ended up with wedding rings (ok, I do know - my cousin is a jewelery genius and he made them for us), but it took us 6 months after eloping to get them. And then it took Spouse 5 months to lose his. So mine is on a keychain (stacked silver ring, no gems) and he's ringless now for almost a year. Meh. Whatever makes you happy; and vintage is totally the way to go!

Congrats! Congrats! I think you made a lovely choice. And you will have the ring long after you got rid of an engagement mattress. I cannot wait to hear how you sort through wedding who-ha.

I am a girl that happily eloped!

Your story is so similar to mine. I got a vintage ring too, after not wanting one at all at first, and now I LOVE it. I stare at it all the time because it's so pretty. Ecogeoman is jealous that he doesn't get to wear it himself (we picked it out together).

We need to shop for wedding bands soon. I'd like to buy used for those as well. I'm hoping that it won't be too difficult to find one that goes with my engagement ring.

This made me laugh:

"it's super shiny! I'm getting a little distracted right now looking at it."

There's one particular meeting room in my last job where diamonds really catch the light and sparkle really nicely. For a few weeks (OK, months) after I got engaged, I'd sometimes just stare at the ring when I was in meetings in that room. And I wasn't the only one - I caught other people doing the same thing!

I love the war stories!

congratulations!
What a beautiful option. I love the idea that your vintage ring has a history of love and will receive a new 'life' of love with you and your FH (future husband :) ). Yep, there are acronyms in the wedding blogosphere.... my fav? STD- 'Save The Date' bahahaha. people use it and I snickered every time I read it. cuz i'm grown up like that. :)

Love and Light to you and your new journey!

Best wishes, Arduous, for a long and happy marriage.

Huge congratulations!!!! That is so exciting. The engagement, the ring, the chance to follow you vicariously on all the little decisions that come with a wedding!

Congrats! The ring sounds perfect and very eco-friendly so you can enjoy it without guilt!

Engagement rings signify care, sincerity and love between the couple. It is a symbol of promise and commitment which you make with your partner that you will be with her no matter what happens...cheer up!
Engagement Rings

Congratulations. My husband and I used to call each other "spouslings" because we both shuddered when we said "fiance."