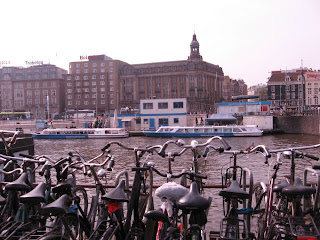 A while back I was talking about how I thought a truly sustainable country was one in which both human welfare and environmental concerns were taken into account. Thus, it isn't enough to have one or the other, we need both. And EJ asked if there had ever been a welfare state that had been sustainable for several generations.
Well, the answer to EJ's question is no, mostly because the modern welfare state came into existence after World War II. So while there has been state welfare for a long, long time, our current concept of a welfare state is only about 60-odd years old.
However, if ever there was a contender for a sustainable welfare state it would be the Netherlands. Given the Netherlands' affluence, its greenhouse gas emissions are quite low and they have ambitious plans to further reduce reductions. It's also got the full complement of government programs: health care, public housing, etc.

So how do they do it? Well, a look at Amsterdam provides a clear indication of one important means of reducing greenhouse gas emissions:

In fact, there are now, on average, more trips taken via bike in Amsterdam than via car. But a bike culture doesn't occur in a vacuum and the city is designed for bikers with bike lanes and bike parking in abundance, and car parking is seriously restricted. Moreover, speed limits are relatively low in order to increase safety.

And it works. Even though no one I saw biking around in Amsterdam was wearing a helmet, their bike fatality rate is extremely low ... lower than in the U.S. where everyone seems to wear a helmet, knee pads, and reflectors among other things. (Side note: do you think people would bike more if it weren't such a freaking production every time you needed to get on your bike? Why can't people bike in jeans anymore? Why must we wear lycra and spandex every time we hop on our bikes? Why am I saying we as if I've been anywhere NEAR a bike in the past ten years?)

But it's not just the bikes. Amsterdam's approach to the environment is integrated into all their policies. In housing, Amsterdam has been working with housing associations, who supply over half of the housing in Amsterdam, to make the housing more efficient. And one of their recent programs trained unemployed young people to become efficiency advisers to housing associations. People got jobs, other people got more efficient houses, and less carbon was emitted. Win, win, win.

The point is you can have a high population of relatively affluent people living fairly sustainably if you do it properly. Amsterdam seems to be doing a pretty job of getting things right, and they are also getting better.

We can learn a lot from their example.
Posted by ruchi at 12:01 AM

That sounds awesome. I've been traveling around the western US the last couple weeks and stumbled on a few sustainable cities here as well. I love seeing how others do things and what we can learn.

It's a great place, but for all practical purposes, it would be a far more ethical city (and country!) if prostitution (purchase and sale) was treated in a Swedish fashion: banned.

for the record prostitution is only decriminalised in Amsterdam, not the whole Netherlands. And just because something's banned doesn't mean it doesn't happen and people don't make a lot of money from it...

I mean look at the drug and sex industries in just about every other country in the western world...

We have just added your latest post "Spotlight on Sustainable Cities: Amsterdam " to our Directory of Environment . You can check the inclusion of the post here . We are delighted to invite you to submit all your future posts to the directory for getting a huge base of visitors to your website and gaining a valuable backlink to your site.

I'm actively anti spandex and what I call clown-wear. I ride with a group every week that wears normal/everyday clothes to ride around to the market or to a picnic or someplace else. Move to SD, I'll introduce you to the bike gang and I think you'll be impressed at this growing cadre of cyclists.

I'm with Beany. If I had to wear special clothes for biking, I'd never ride. Same reason I never go to the gym anymore. I zipped around town yesterday in flip flops and cotton capris pants. I do wear a helmet... for two reasons. 1) I'm brainwashed to be paranoid that without it, I will surely crack my head open, and 2) I don't want to be publicly flagellated by the helmet posse.

I went on a bike tour 15 years ago during my trip to Amsterdam. It was great fun, and you're right. The roads are very bike friendly. And I don't recall having to wear a helmet.

Don't forget that Germany, many college towns in the US and quite a few places in the UK are fairly bike-friendly... maybe not as much as the Netherlands, though.

I wish more cities would get on board with this. Imagine obesity rates if US kids actually had safe paths to cycle to and from school every day?