Today I am eating a heavenly butternut squash soup for lunch. I am sincerely glad it is so good, because making it almost killed me.

It all started when the magnificent ScienceMama sent me a few recipes to try including her recipe for butternut squash soup. I LOVE butternut squash soup. In fact, it might be my current favorite soup. So I skimmed through the recipe, and it seemed that ScienceMama had adequately judged my level of culinary skill (or lack there of.) Most of the recipe seemed doable. The only thing that confused me was this one phrase: "Brush cut side of squash with oil."

"Brush cut? How do you brush cut something?" I wondered. I came to the conclusion that brush cutting must be some sort of more advanced culinary skill that I had yet to learn, perhaps involving a cooking utensil I didn't own- half basting brush, half knife? Because I don't ALWAYS like to telegraph my cooking retardedness, I decided to Google "brush cut," and see what I got.

Of course, all I got was that a brush cut was a type of hair cut. Which, somehow, I doubted that I was supposed to give the squash some sort of hair cut, so that was out. I googled "brush cut cooking," and came up with many results involving brush cutting things, but nowhere was brush cutting defined!

Finally, I gave up and turned to Awesomest Co-worker. "Okay, this is probably a really stupid question, but I'm looking at a recipe that's telling me to 'brush cut' something. What does that mean?"

Awesomest Co-worker looked at me dumbfounded. "Brush cut? I have no idea."

I began to feel relieved. "Oh good. So this isn't some sort of culinary term that EVERYONE knows except me."

"Brush cut side of squash with oil," I began.

And that's when Awesomest Co-Worker started to laugh. "It's not brush cut, it's brush THE CUT side of squash. Like, brush the side of the squash that has been cut as opposed to the non-cut side."

That being settled, I reviewed the rest of the recipe. It looked easy, though time-consuming, with a lot of down time while things roasted or simmered. So I figured, while I was making that, I might as well make tomato sauce as well. I had been meaning to try my hand at making my own tomato sauce- mostly to use up all my tomatoes before they went moldy. (I'm trying really hard this time NOT to end up with moldy vegetables. So far, I've been successful.)

The tomato sauce recipe looked easy too. Why not just make one night a giant cooking night? So, I decided to make BOTH the butternut squash soup and the tomato sauce.

THIS WAS MY HUGE MISTAKE.

I got home at 7:10 pm, having had to stop at two grocery stores on my way, because neither Trader Joe's nor Vons carried ALL the ingredients I needed. I immediately got to work on the squash.

For a while it was all sunshine and daisies. I successfully roasted the squash. 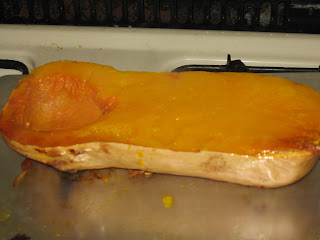 I observed that tomatoes look naked and sad when peeled, and that de-seeding them is intensely boring. 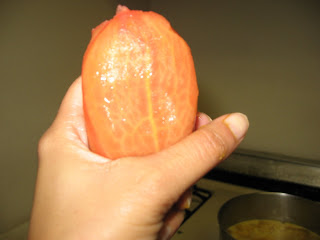 But as the minutes started to tick by, I got more and more tired. My back ached from stooping over to chop things. My feet hurt from standing. I was STARVING because I still hadn't found time to eat dinner. My hands were freezing from handling cold vegetables, and the rest of me was burning up from the heat of the stove and oven. I was slowly getting crankier and crankier.

By 10:00pm I was entering the home stretch. The butternut squash soup was almost done. All I had to do was throw it in the blender, and season it. The tomato sauce just had to be pureed in the food processor and then reduced. No more chopping! Hooray!!

And then my blender did this: 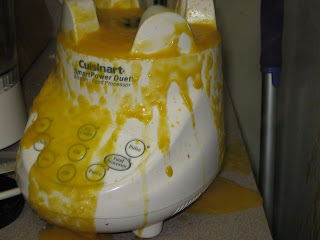 Butternut squash soup splattered all over my fridge, the counter, the blender, and my hair. I quickly unplugged the blender before it could vomit up anymore soup and stared at the mess. By this time I was tired enough, hungry enough, and achy enough that I could have cried. But luckily, the first thought that came into my head was, "Well at least it will make for a good fodder for my blog."

I managed to salvage most of the butternut squash soup, and then started re-blending it a cup at a time, while holding on tight to the blender to prevent it from leaking. I quickly tasted the soup (amazing!) and I wanted to stop right there, but I still had the freaking tomato sauce to finish and also my kitchen looked like 20 toddlers had had a food fight in it.

I quickly put the tomato sauce through the food processor, and set it on the stove to reduce while I cleaned the kitchen. I cleaned up most of the dishes, and then decided, "Screw it. I'll do the rest tomorrow," and went to watch TV and eat the remainder of the rum cake from Sunday night.

Meanwhile, my sauce continued to reduce. I took a quick shower. I got dressed for bed. I brushed my teeth.

The sauce was still not done.

At last, at 12:30 at night, a mere FIVE AND A HALF HOURS AFTER I STARTED COOKING, my tomato sauce was done. Luckily, it too, had turned out to be delicious.

As I crawled into bed last night, I decided, "That's it. I'm eating sandwiches and omelets for the rest of DeSloFooMo."

Today, I feel a little better about the whole thing. But I have learned my lesson:

Never cook two time intensive recipes, neither of which you've ever tried before, in one night. Particularly a work-night.

I still haven't figured out exactly what went wrong with my blender, though I'm assuming that in my exhaustion, I didn't lock it down properly. I will say that it will probably be a little while before I work up the nerve to use my blender again.
Posted by ruchi at 9:52 AM

Actually, maybe I should have warned you... When pureeing soup in a blender, you should never do very much at a time because the soup is (relatively) thin and when hot will easily make the lid of the blender soft and bend-y enough to let all the soup come right out of the lid. It doesn't matter if you put the lid on or not...

This is why I'm a big proponent of the stick blender. Much easier, much less mess, no blender to take apart and clean, no extra messy dishes.

Anyway, I'm sorry that the soup was a mess, but I'm glad it was delicious and I hope you will continue with your forray into cooking. This is how you learn! (I too once dealt with a vomiting blender before I figured out not to put so much freaking soup in the blender!)

wow! what a process...sounds good to me though

I'm sorry you didn't have a good cooking experience. I should also apologize for having laughed out loud reading your post. I hope this won't deter you from more cooking. Like anything else, the learning curve is steep at first, but it will get better.

Mad Hatter, don't apologize for laughing. Part of what makes me continue to cook is because I figure, either I'll end up getting it right, or I'll have a funny story to tell. :)

My sweetie stumbled upon your blog and e-mailed me the link to this post. ROFLMAO! I've been there, oh have I been there. But, like you said, all mishaps nowadays are fair game for the blog. Although my sweetie warned me just last week, "Don't put this on your blog!" Dang, I sure wish I could remember what it was...

Sure glad both recipes turned out well after that much work.

Arudous,
Just saw this post, a few days late. Ah, it sounds like a hellish night! I've been there, too... But I must apologize, along with Mad Hatter, for laughing at your post. Peeled tomatoes do indeed look sad and naked.

Glad to hear that in the end, the recipes tasted great!

Hi-larious! My food processor does that spit up thing and then vomits all over the counter every time I fill it up too high - which I still do on a regular basis. Never learn, I guess.

And the tomato sauce thing. That was me last fall making chutney feeling all "Martha" but, somehow, once it gets to 1am and you still have to hot water can the stuff - not so Martha anymore.

i just found your blog trying to google "brush cut". I too am making a butternut squash soup and had no idea how to brush cut one. ha! thank you for posting this!! :-)

Side effects of steroids said...

You worked hard but you have a great award!!!

Best Blenders For Your Kitchen said...