So my boyfriend and I have been on the lookout for a little cart for our kitchen for a while. Now, we could have just gone to Ikea, and picked out any number of these kitchen carts, but as much as I'm now a normal little consumerist just like anyone else, I made a pledge to myself that this move was not going to involve a trip to the Ikea store. Every other time I've moved (except when I moved to London), I've worshiped at the Ikea altar. But that was all BEFORE. Now, I can't help but feel like Ikea represents some of the worst excesses of our throw-it-away culture. Because they make furniture SO cheap, everyone just buys it, and then dumps it a year or so later. As much as I am willing to shop and buy new, even venturing into the big box stores now and then, Ikea is my current line in the sand. The one I'm not yet willing to cross.
So, instead I hit Craigslist for kitchen carts. I quickly found that even if I were willing to go to Ikea, it would be completely foolish to do so: there are a plethora of Ikea kitchen carts on Craigslist for dirt cheap. Why pay $60, when you could pay $10? My opposition to Ikea doesn't extend to used Ikea furniture on Craigslist, but honestly, neither of the ubiquitous Ikea kitchen carts were quite what we wanted.
So, we kept looking. This one was too small, another too wide. Another too ugly, another too far away. Meanwhile, our microwave continued to sit on the floor. Finally, I was ready to call it a day, and just pick up one of the many used Ikea carts, when we found it. A nice, fairly solid cart with a couple of drawers and extra shelving.
Excited, I quickly made an appointment to view the cart. I gave my boyfriend the dimensions and asked him whether or not he thought the cart would fit in the back of our car.
"Yeah, it should," he said nonchalantly. And I, eager to pick up the cart, believed him.
I know. Big mistake.
So, we find the cart, and it looks as advertised, and is clean and in good shape. We pay the nice couple some cash, and wheel the cart into the warm San Francisco night to our car.
Where it turns out, that, in fact, no, the cart will NOT fit. We try the trunk. We try the back seat. We try multiple configurations, saying "Pivot" really loud, but nothing seems to work.
So now, we're stuck on some random street with our kitchen cart.
My boyfriend suggests we call a friend with a station wagon. I suggest we hire a taxi mini-van. He pulls out his cell phone to call his friend, while I stand on the street corner to hail down a cab. He's on the phone with his friend when a taxi mini-van pulls over. I grab my boyfriend and we explain our situation to the cab driver. The driver seems dubious about the whole endeavor, but agrees that we can bring the cart over and try to load it into the van. We run to the cart and grab it to bring to the taxi, and ... he's long gone.
So.
Round two. My boyfriend tries to call his friend again. I head back to the corner to try and find yet another cab. After a minute or two, I manage to hail another mini van. Again, the cab driver is dubious, but this one pulls over and puts the seats down in the back. We bring the cart over, and the cab driver shakes his head. "It's not going to fit, but you can try," he says.
We tip the cart gently into the back of the minivan and it fits!! Success!!
Relieved to no longer be stuck on the street, I get in the cab, and my boyfriend follows behind with the car.
We get home and quickly wheel the cart into place, satisfied that our Craigslisting adventures paid off.
I guess that's one more advantage to not going to Ikea. While going to Ikea means you're less likely to wind up stranded on the street with a kitchen cart, you also do have to get home and assemble said cart from ancient Scandinavian scrolls. Given my proclivity for immediate gratification, it was nice to have the cart look like this five minutes after entering: 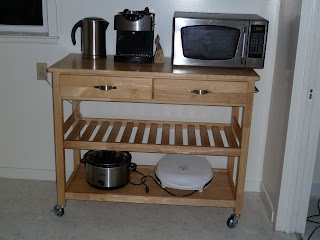 Cute, huh? Thanks, Craigslist, my microwave appreciates having a real home.
Posted by ruchi at 9:43 PM

Nice adventure, Ruchi. Glad you, and the cart, and the boyfriend all made it home in one piece!

I started to write about my craigslist adventures but it got too long, so I'll do my own post.

No craigslist or freecycle for us really rural people...

It's ikea - doesn't come aprt as easily as it went together? The little ikea allen wrech is your ally.

ooo that IS a really nice cart!! Bargain Ruchi!!

Heh, Chile, your adventures are funny. I enjoyed reading them.

Anonymous, well the cart we got was actually NOT Ikea. So it probably didn't come apart as easily as Ikea.

I sort of feel stupid admitting this, but I haven't any idea what Ikea is. I'm guessing it's a brand of furniture? I suppose it's to be expected, since the only time I ever purchased a new piece of furniture was an entertainment center from Target 20 years ago when I was young and didn't know better. Sort of shocks me to realize that most people are so "in the know" about furniture brands that they'd recognize them by name. Guess I am "pretty far out there" after all!

Rebecca, Ikea is a furniture store, not a brand. They're fairly pervasive on the coasts, but there aren't too many in the middle of the country, so that might be why you haven't heard of Ikea if that's where you live....

I live close to an Ikea. Its the only one in my state. I have to laugh because when poeople find out, they freak out like I live next to holy ground or something.

And I get the appeal. I'm poor so I understand the frustration of wanting to have something nice and functional, but not having $500 to spend on one piece of furnatire, but yeah... its not made to last forever.

I've gotten lucky with Craigslist. The best find ever was a pair of solid oak bookshelves for $20.

Laughing through this whole post! We have had so many Ikea adventures with our new home and in those instances, I'm glad I own a minivan.

Although I shouldn't be proud to say this here, we bought a ton of Ikea stuff when we moved to our current place. But since it comes in boxes, we were able to fit a queen bed including headboard, two night stands, three end tables, and a large rug in my civic all at once. Getting assembled stuff home is the drawback of Craig's list, although as Anon points out, if it goes together easily it probably comes apart easily.

Sigh...we'll do better next time we move.

My husband is a carpenter, so No Ikea Furniture Shall Ever Enter Our House, Ever. (Small items like shoe racks, laundry bins, storage stuff etc. are allowed). It can be frustrating trying to find something that we both like AND that meets his stringent quality guidelines, but it's good overall as being lazy and going to Ikea isn't even an option.

I'll be in the market for a bookcase very soon, and I'm definitely going to try Craigslist first this time. It worked out well last time - we got a great deal on a cherry wood bedroom furniture set (king size sleigh bed frame, two bedside tables, 2 large dressers). Hooray for Craigslist, and hooray for friends with jobs that require pick-up trucks!

Cute cart. Not to be a debbie-downer: but was it really worth two cars?